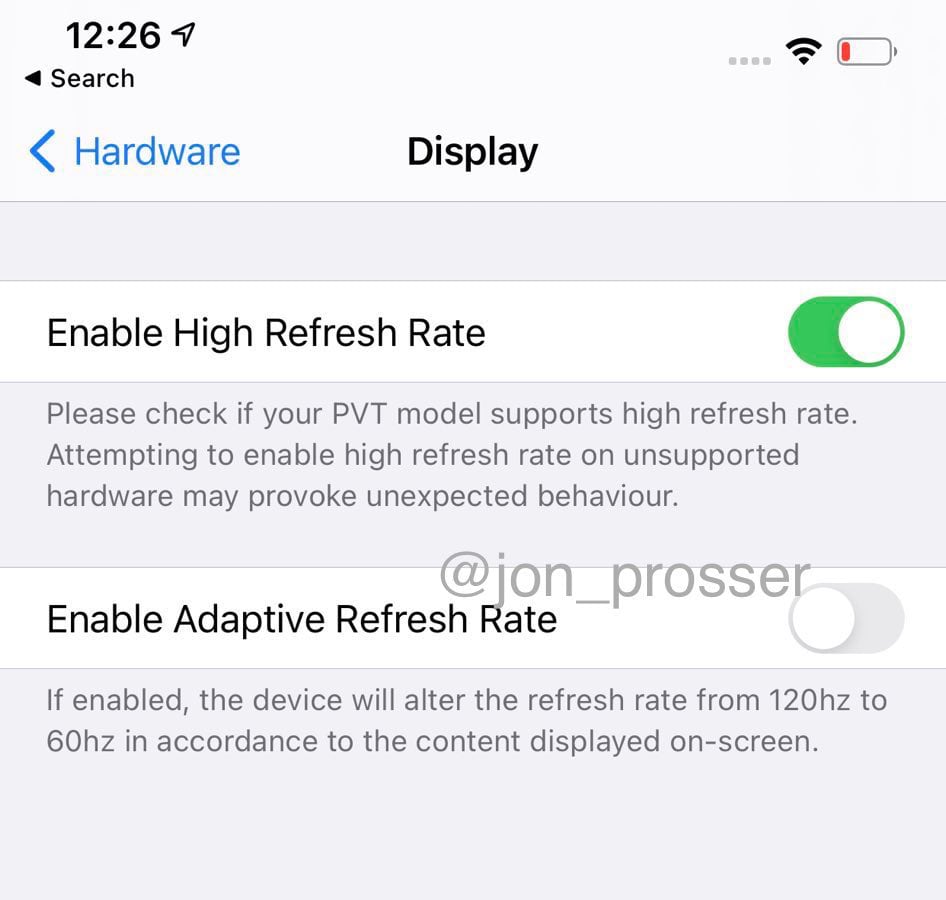 Screenshots said to be sourced from a test model of the upcoming 6.7-inch iPhone 12 Pro Max suggest the flagship device could feature a 120Hz display and a LiDAR Scanner.

Shared by leaker Jon Prosser, the screenshots are said to be from a PVT (production validation test) model of the 6.7-inch iPhone. The settings have a toggle to enable “LiDAR” for “assisted auto focus and subject detection for Video and Night Mode.”

There’s also an option to “Enable High Refresh Rate” and “Enable Adaptive Refresh Rate,” a setting that says “the device will alter the refresh rate from 120Hz to 60Hz in accordance to the content displayed on-screen.”

There have been mixed rumors on whether some ‌iPhone 12‌ models will feature 120Hz ProMotion display technology, and display analyst Ross Young earlier this week said that Apple is facing supply chain issues with 120Hz display driver ICs for the ‌iPhone 12‌ Pro, and so Apple may opt to ship with 60Hz displays or delay the launch of the ‌iPhone 12‌ Pro models.

Prosser claims that some of the 6.7-inch PVT ‌iPhone‌ models are equipped with 120Hz displays and some are not, and the alleged settings screenshots do mention the existence of both.

Rumors have long suggested the ‌iPhone 12‌ Pro models will feature a LiDAR Scanner like the LiDAR scanner added to the 2020 iPad Pro models, and this is a feature that is likely to be limited to the higher-end iPhones this year. Both LiDAR tech and 120Hz displays, if implemented, will be high-end features.

These screenshots from Prosser should be viewed with some skepticism. There is some questionable wording in the screenshots, with unusual spelling, capitalization, and wording that Apple does not use. One screenshot uses the UK spelling “behaviour,” for example, and Hz is not properly capitalized. “Zoom Capabilities” is misspelled in another of the screenshots, and it references “Slow Mo,” when Apple calls it “Slo Mo.”

Prosser explains this away by suggesting the wording here is “written for people testing the units,” which can’t be confirmed. It’s not clear if the screenshots or real or have been faked, which would not be difficult to do, but Prosser says that he plans to share a video of the PVT ‌iPhone 12‌ Pro with these settings in the near future.

In the past, Prosser has been fooled by the people who provide him with content to share. In June, for example, he shared images that he claimed were of a wireless charger Apple was still working on, but it later turned out those images were of a clone device not designed by Apple at all. He has, however, shared accurate information on Apple’s launch plans in the past.

Update: EverythingApplePro has also shared the same screenshots on an alleged ‌iPhone 12‌ Pro Max test device. Curiously, these screenshots show an “AM” next to the time, which is allegedly visible due to the extra display space on either side of the device.

EverythingApplePro claims that the 6.7-inch ‌iPhone‌ has a resolution of 2788 x 1284 resolution with 458 pixels per inch and that a power adapter won’t be sold alongside the ‌iPhone‌, which has been previously rumored.

Update 2: Prosser has now shared a video that features the camera settings screenshots and allegedly depicts the ‌iPhone 12‌ Pro Max. The notch depicted in the video shared by Prosser appears to be the same size as the current notch, suggesting no reduction in size if the device in the video is truly an ‌iPhone 12‌ Pro Max and not a fake.