Startups are paying for more subscription services than ever to drive collaboration during working hours, but — whether or not the Slack-lash is indeed a real thing — the truth is that filling your day with meetings can sometimes be detrimental to actually… working.

Time management software and daily planners put the accountability on the individual, but when you’re in several hours of meetings per day, there’s a lot that’s out of your control. I recently met with Matt Martin, the CEO of Accel-backed Clockwise. His startup has a really interesting pitch for taking a look at individual employee schedules through the lens of the entire team and moving meetings around to maximize “focus time,” which Martin defines as blocks of at least two uninterrupted hours during your day.

Clockwise’s customers already include Lyft, Asana, Strava and Twitter; they’ve been aiming to build out a wide footprint of customers by offering their product for free at first. They’ve raised more than $13 million over two rounds including a Series A co-led by Accel and Greylock and a seed with participation from Slack Fund.

The startup’s software, which integrates with Google Calendar, has been bringing people into the fold for shifting these meetings around, but their latest update aims to give teams the option to let its Clockwise Calendar Assistant do some of the heavy lifting automatically. 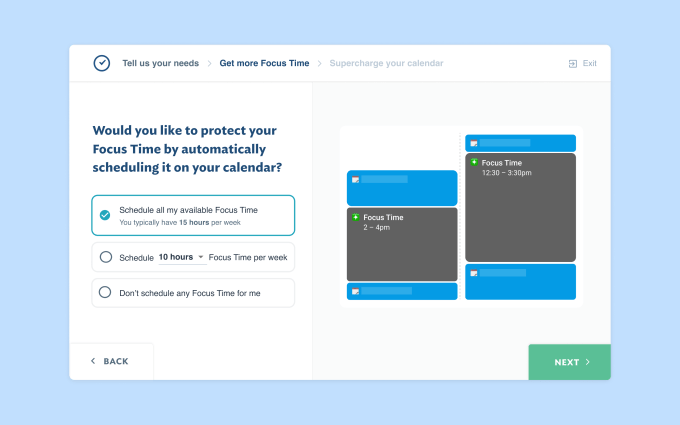 Managing calendars en masse obviously has the potential to piss people off. Clockwise has tried to build in certain accommodations to keep friction low, and they’ve gotten good feedback from early testers.

Certain employees, like engineers, likely benefit from more uninterrupted time to work, so Clockwise gave employees a way to designate how much “focus time” they generally need per week. They’ve also added the ability to bring personal calendars into the mix so that users can designate time when they have unmovable personal conflicts. Not every meeting is in your office; when there are locations in the invites, Clockwise will account for travel between the two addresses inside your calendar.

Some meetings can’t be moved, others rely on off-site folks in different time zones, sometimes a high-level exec needs to be in a meeting and their schedule is all that matters. Not all meetings need to be flexible, but Clockwise hopes that by automatically resolving conflicts for team meetings, they can leave employees with fewer useless half-hour chunks of time during their day. 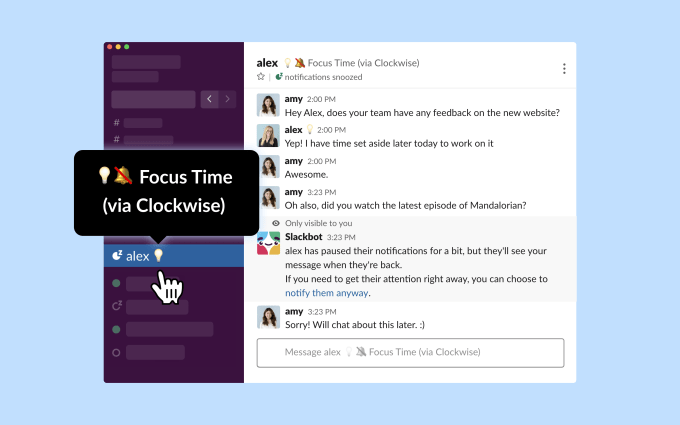 Alongside today’s Assistant update, Clockwise is also boosting its compatibility with Slack. Users have the ability to let Clockwise turn on do-not-disturb automatically during designated “focus time” and can let the app populate their Slack status with the current meeting they’re in.

When you think about how much energy has been spent by startups looking to reinvent email or chat, it’s fascinating that there hasn’t been more energy fixed on the humble calendar. Anecdotally, there seems to be plenty of demand for a “luxury” Google Calendar, and yet there hasn’t seemed to be a proportional amount of action. Clockwise has one of the more interesting offerings, though I’m sure more will be popping up alongside it soon.