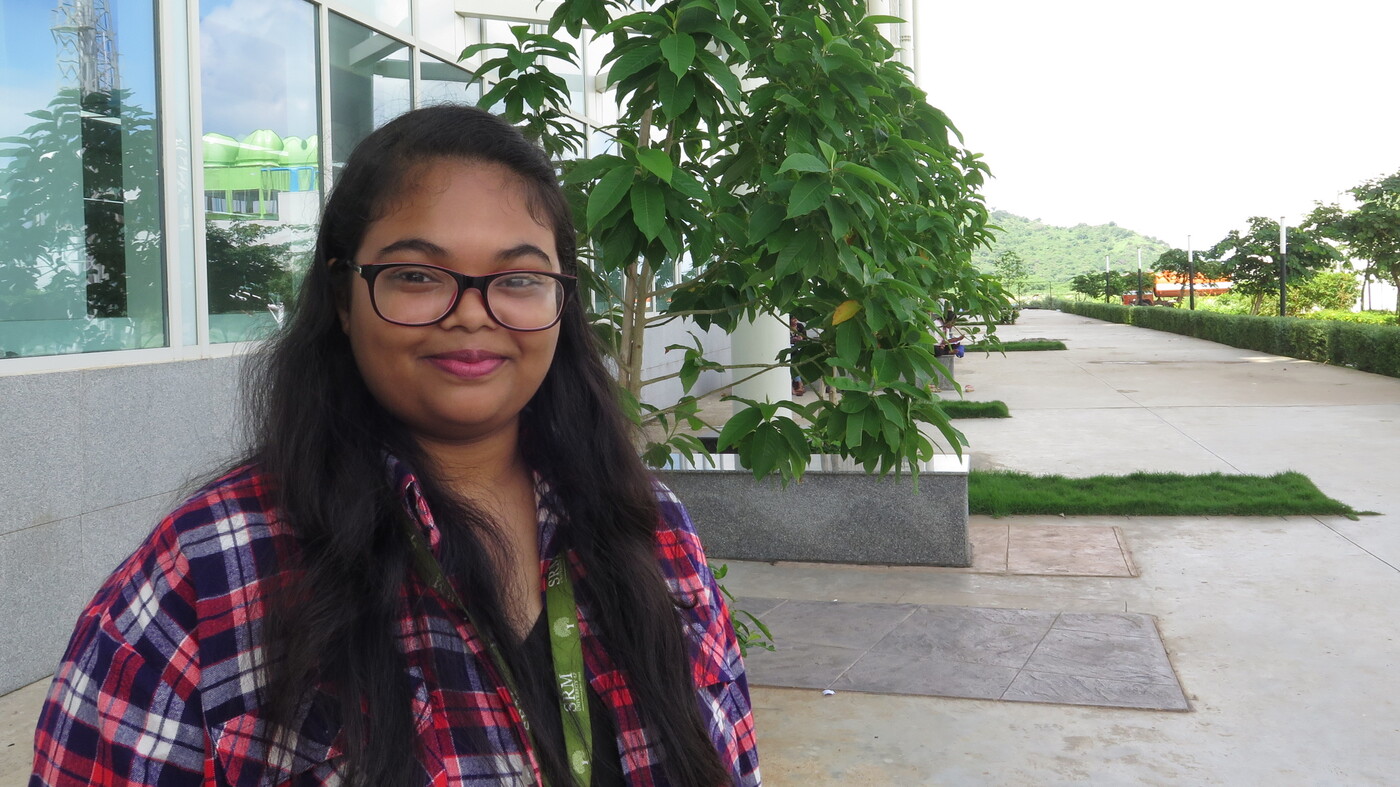 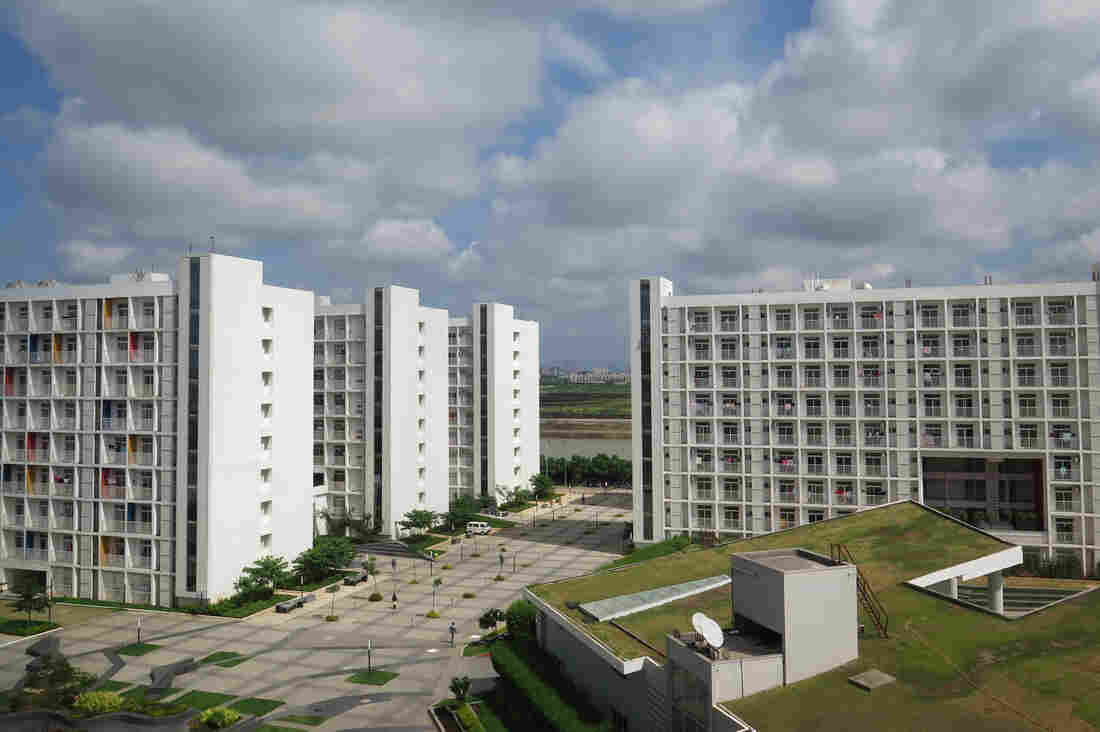 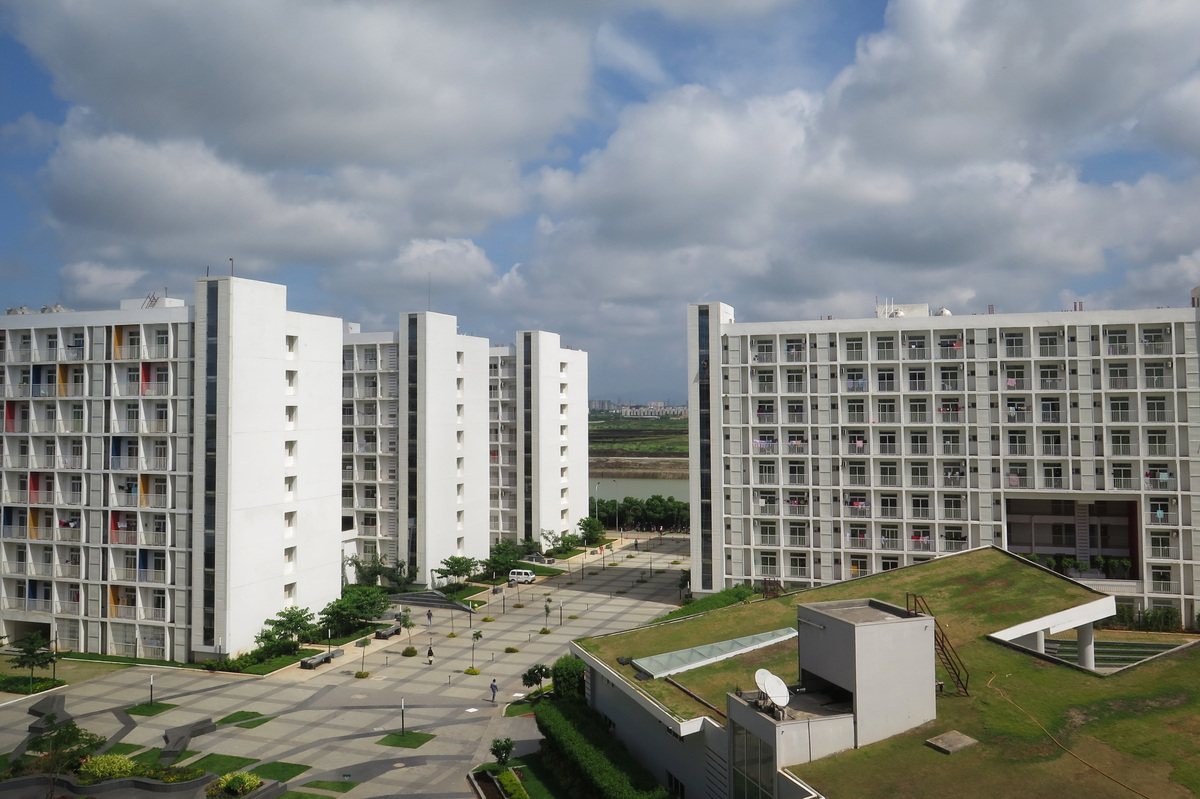 In southeast India, rising out of green fields roamed by herds of goats, is a brand-new set of white towers connected by courtyards, balconies and breezeways. This is SRM University Andhra Pradesh.

About 650 million Indians are under the age of 25. In other words, one-fifth of the world’s young people live here. They want jobs, and they want an education. Enrollment in higher education here has been rising for the past decade, but in order to accommodate demand, and for the country’s economy to continue to grow, the number of classroom seats has to leap forward at a dizzying rate. One author estimated in 2018 that the country needs to build at least 1,000 new universities, plus 50,000 technical colleges — in 10 years.

SRM Andhra Pradesh represents this wave. But the university is not just trying to meet demand for traditional higher education — it is trying to innovate and get ahead of the pack.

The newest campus of the SRM Institute of Science and Technology, a private institution founded in the 1980s, SRM AP was built in just five months. It features a state-of-the-art water catchment system, solar panels, labs full of high-tech equipment, and — a huge draw in this climate — air-conditioned dorms.

Aayusi Biswas, a 20-year-old engineering student from hundreds of miles away in central India, has filled her dorm room with plants, Harry Potter memorabilia and books. “I love reading,” she tells us.

She also loves dreaming up new startups, and that’s what drew her here: “The way this university promoted entrepreneurship is something I’ve never seen before at Indian colleges.” With her T-shirts and jeans, glasses, fluent English and coding skills, Biswas is the kind of bright self-starter you’d expect to meet at, say, UC Berkeley — where she did study abroad.

Andhra Pradesh and bordering Telangana state is particularly famous for producing — and exporting — technical talent. In fact, the region has sent so many graduate students and engineers to study and work abroad in recent years that Telugu, the area language, became the fastest-growing foreign language in the United States. 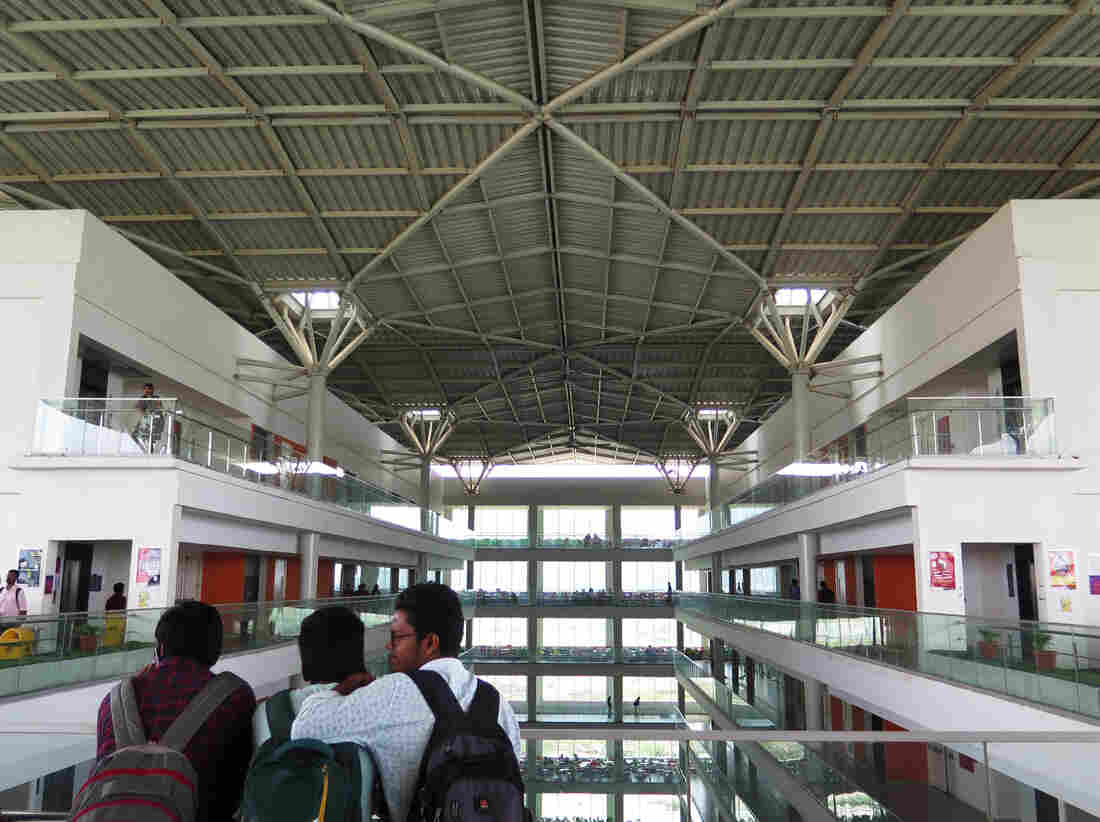 Students take a break between classes in the open-air atrium at SRM Andhra Pradesh.

“We are the brainpower suppliers to the world,” says Vice Chancellor Narayana Rao, proudly naming regional heroes like Sundar Pichai, the CEO of Alphabet. But, Rao says, to get to the next level of development, India needs to home-grow its own talent and keep them here. And that’s the enormous ambition of SRM AP.

Step One: Design a new curriculum

SRM AP is trying to take the lead in innovating both what and how Indian students learn. For one, they’re broadening into the humanities. There is an entire school of liberal arts, which doesn’t exist at many Indian universities. Most SRM AP students, like Biswas, are concentrating in engineering and computer science, and doing high-tech research into areas like batteries, 3D printing and materials science. But they also take subjects like rhetoric, theater and gender studies.

An English professor here, Prateek (who uses one name), taught previously at Queensland University in Australia and at Oxford University in England. He returned to his home country of India because SRM AP gave him the opportunity to do his own research and create his own courses.

For example, he’s currently teaching an elective on modern Indian theater. As part of the course, students wrote and performed their own play. The topic: solar-powered cars. “These are computer science and electrical engineering students,” Prateek explains, “so they are seeing things from that perspective and how they can change the world through theater and through performing something that will help other people to become aware of what is happening to the environment.” 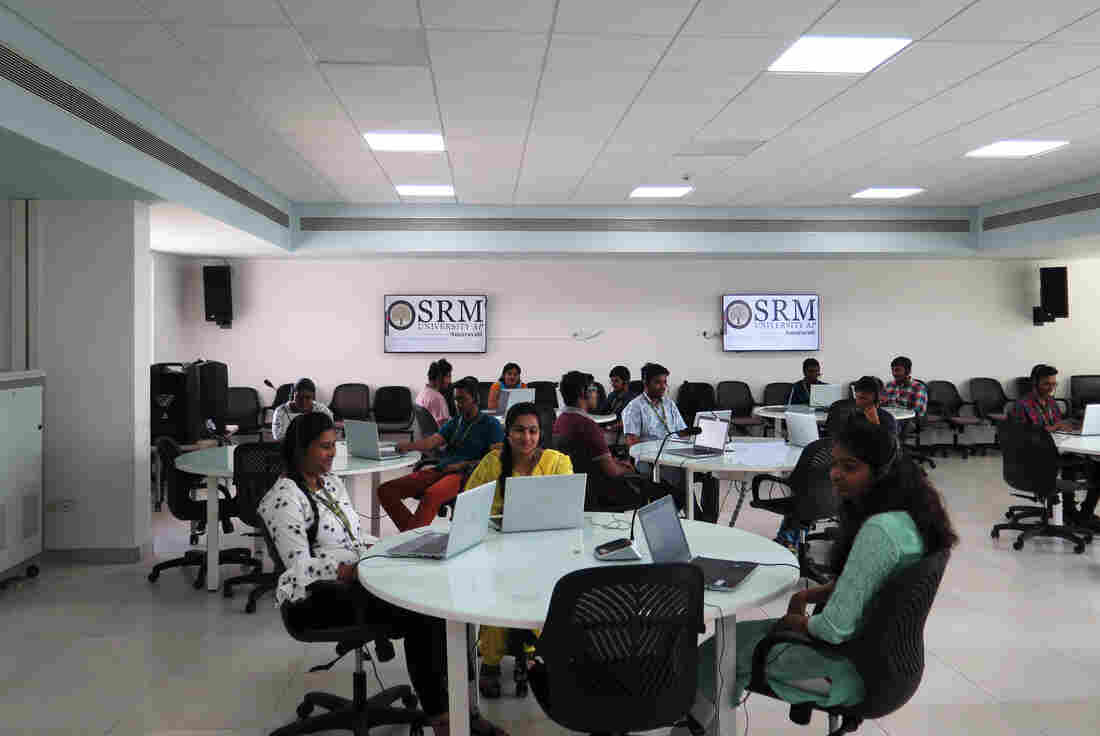 Students in class do most of their work over video chat.

The emphasis on interest-driven and participatory learning is something new. Jamshed Barucha, who previously held the post of vice chancellor, says the norm in India, since he was growing up in Mumbai, has been “bunking,” or skipping, classes and then “mugging up,” or cramming for exams, with students doing the minimum to get by with a “a very memorization oriented, very rigid curricula.”

Going in the opposite direction, SRM AP has become the first outside client of an American education startup called Minerva. Their software uses artificial intelligence to promote active learning — basically, keeping students speaking up and problem-solving throughout class. SRM is piloting the program in two subjects; introductory English and an upper-level engineering course.

In Prateek’s introductory level class in spoken English, the students all wear headsets and sit in front of monitors where they can see their classmates over video. The software selects students at random to answer the professor’s questions.

“In the beginning we all were exhausted,” says freshman Sai Krishna Vishnamuluka. “The class is like an exam to us.” In fact, grades in Minerva classes really are based on in-class performance, not exams.

To a first-time visitor, the setup seems clunky, with students in the same room communicating over video chat. And, it’s bandwidth-thirsty, which is an issue in Andhra Pradesh. Despite frequent connection glitches in the class we sit in on, Prateek has become a big fan.

“In a non-Minerva classroom, what you notice is, students don’t want to come up with an answer, so they will try to hide behind the book as if the teacher won’t be able to see,” he says. “In Minerva, what will happen? They do not have an option because the machine will throw them on the center stage. So they’re on the edge of their chair waiting for their turn to come. In the beginning it’s a problem, they’re nervous, they’re afraid, but as they get used to the platform they literally love it.”

Vishnamuluka, the freshman, agrees. He says he took a risk coming to SRM AP, before anyone else had even graduated from the school.

“When I came to the college, there’s never an outgoing batch [class] yet. We are the third batch here so I thought, this is a fresh university out of the box.”

His experience with Minerva has made him more confident in what he’s learning here. 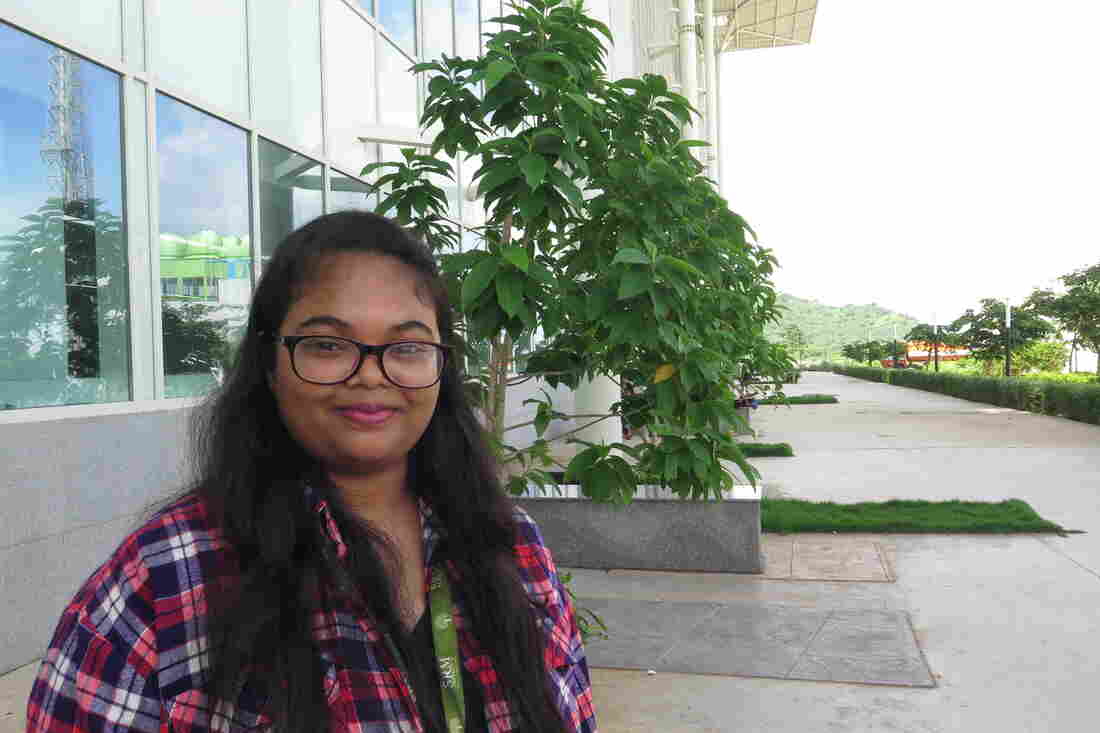 Aayusi Biswas belongs to a group called Next Tech Lab that has won a total of 50 national and international hackathons all over the world. 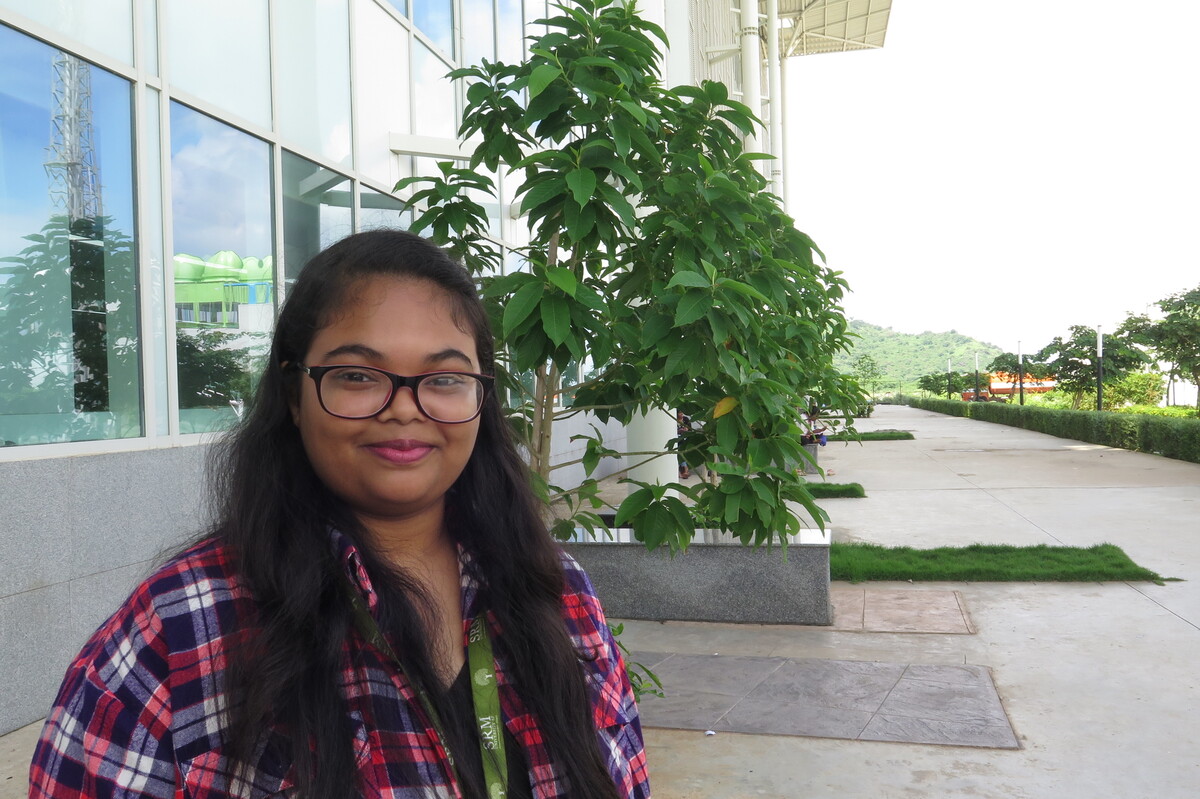 Aayusi Biswas belongs to a group called Next Tech Lab that has won a total of 50 national and international hackathons all over the world.

The American-style learning also spills over into extracurriculars. Aayusi Biswas belongs to a group called Next Tech Lab, founded at a different SRM campus 4 years ago. “We work on things as big as AI, deep learning, IOT [Internet of Things], AR/VR [Augmented/Mixed Reality], anything right now that is being used in cutting edge of industry, but not taught in most universities,” explains Next Tech Lab co-founder Anshuman Pandey. “We have this hacker culture where we build prototypes and participate in a lot of hackathons.” They’ve won a total of 50 national and international hackathons all over the world.

SRM AP’s Next Tech Lab students bring their laptops, covered with stickers, and huddle at long tables in a bright, open room in the main campus building. They’re working on a wide range of projects. Biswas alone has taken third place in a hackathon with an AI-fueled tutoring platform, and is working on a program using algorithms designed for genetics to automatically generate designs for suspension bridges.

Right now she’s excited about “Python in Pajamas,” an all-girls, late-night event in the Python coding language. “It’s just going to be a night full of coding, in pajamas,” she explains. “It’s specifically for first-year students who are new to this field of tech and are seeing guys who are already … proficient in coding.” To participate in this and other Next Tech Lab events, the female students had to get special permission to break their dorm curfew.

She says she and her fellow students are busting stereotypes and grabbing at new options. SRM AP has more women in engineering than most Indian schools — they make up about 35 percent of enrollment. Biswas says, in India, “girls are pushed into getting good grades, they aren’t that much into these things — building stuff.”

The students’ optimism is infectious. But there are very literal roadblocks to the expansion of this university. SRM AP is an hour from the nearest city. And the road here ends in a muddy rut. The campus was built on subsidized land that was meant to be in the middle of a brand-new capital city called Amaravati, but right now that project seems to be held up.

Rao, the vice-chancellor, says the fact that the campus is currently surrounded by banana fields is no big deal. “The students look for: ‘Will I get good education and training here? … Will I have opportunities to work on my dream ideas? Do I have role models here?” Applicants won’t be so concerned, he says, with the type of road, or lack thereof. “Cement road, tar road, they won’t ask.”

Rao likes to show visitors a model of a real working satellite built and launched by SRM undergraduates from the Chennai campus. The metaphor is clear: the sky’s the limit.

Will they get there? Maybe, but Biswas for one doesn’t want to finish here. She’s got her sights set on MIT for grad school.