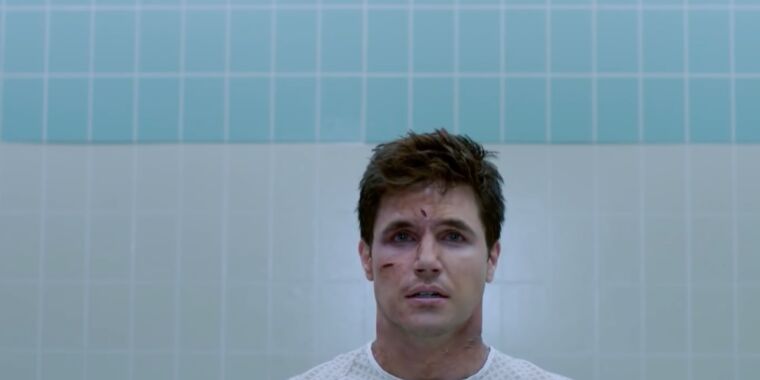 Who wants to live forever? —

It’s the latest comedy series from the man behind The Office, Parks and Recreation.

A wealthy tech bro finds himself in a virtual afterlife in Upload, a new comedy science fiction series coming soon from Amazon Studios. Its creator is Greg Daniels, who also co-created King of the Hill and Parks and Recreation, as well as the American version of The Office. Per the official premise:

In the near future, people who are near death can be “uploaded” into virtual reality environments. Cash-strapped Nora works customer service for the luxurious “Lakeview” digital afterlife. When party-boy/coder Nathan’s car crashes, his girlfriend uploads him into Nora’s VR world.

The trailer opens with Nathan (Robbie Amell) on a hospital gurney, in critical condition, as his girlfriend Ingrid (Allegra Edwards) urges him to take the “upload” option over surgery. “We could be together forever!” she enthuses. Nathan is less keen: “Forever is just soooo long.” But he ends up taking the upload anyway and wakes up in a virtual apartment as Talking Heads’ “Once in a Lifetime” kicks in on the soundtrack. “This is the first day of the rest of your afterlife,” Nora (Andy Allo) calmly assures him.

There are myriad advantages to a digital afterlife, Nathan discovers, like being able to change the weather and associated landscape outside one’s window just by turning a knob. And he feels freer to make some daring virtual fashion choices, with Ingrid’s input. Nora, ever the good customer-service rep, praises Lakeview’s “uplifting views” and “timeless Americana.”

But there are also a few drawbacks. Breakfast is only served in a limited time frame. (“It’s not even real food!” Nathan laments when the contents of his plate automatically vanish before he has a chance to virtually eat them.) And the food and beverages in his in-room virtual minibar require an In-App purchase. Plus, Lakeview’s staff counselor insists on chatting with him through a golden retriever avatar. (“It’s only weird if you make it weird.”)

At least there is Nora, who can interact with Nathan virtually by donning VR gear and entering the simulation. (The digital and real worlds look like they can sometimes “interact” although they can’t connect physically.) The two develop a friendship, with Nora confessing to a hospital patient that she might be feeling something more. Ingrid is technically still in the picture, though, so expect complications to ensue from this romantic triangle.

There are some strong The Good Place vibes here, which is a high bar for any new comedy. But Daniels has plenty of comedy bona fides of his own, and the show looks like it might be a lot of fun. The best moment comes at the trailer’s end, when Nathan declares he’s not supposed to be there, and a young boy overhears. “Nobody feels like they should be here,” the kid retorts. “You think I wanted to fall into the Grand Canyon? They should expect people to try and break the glass floor.”

Nathan is impressed. “I saw that video,” he says. “You dabbed on the way down.”

Because of course the kid did: “That’s how you get the likes.”

With movie theaters shuttering and major studios postponing all the spring film releases—including the May 1 release of Marvel’s Black Widow—now is the perfect time to explore new content on streaming services. Upload debuts May 1, 2020, on Amazon Prime Video.