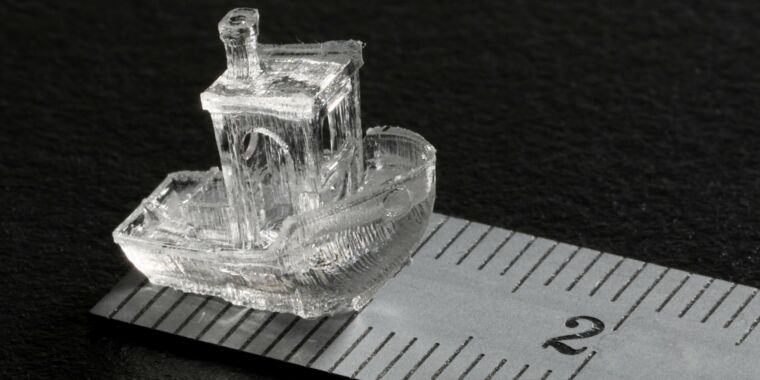 3D printers are great for rapid prototyping and building low-volume, specialized parts, but they sure can take a while. Today’s 3D printers might be called “3D printers” but really, the print heads work in 2D. A 3D model is sliced up into hundreds of 2D horizontal layers and slowly built up, one layer at a time. This layer-by-layer process can take hours or even days, but what if we could print the entire model at once? A new technique demonstrated by researchers from Switzerland’s Ecole polytechnique fédérale de Lausanne (EPFL)—and further detailed in this Nature article— does just that and can print an entire model in seconds.

The new technique builds a model by hardening a photosensitive resin with a laser, not unlike existing stereolithography (SLA) printers. The big difference here is the application of tomographic techniques, the same used in x-rays and ultrasounds, that allows for rotational printing. Laser light is modulated with a DLP chip (just like in old rear-projection HDTVs) and is blasted into a container full of resin. The laser covers the entire build volume, and the container of resin actually rotates while it’s being exposed to the light. The laser projects the model at different rotational perspectives, which is synced up with the spinning resin, and a whole 3D model can be produced in seconds.

The EPFL writes, “The system is currently capable of making two-centimeter structures with a precision of 80 micrometers, about the same as the diameter of a strand of hair. But as the team develops new devices, they should be able to build much bigger objects, potentially up to 15 centimeters.” In this first public demonstration, the build volume is 16mm × 16mm × 20mm, making it one of the smallest 3D printers on earth. An 80 um resolution is also nothing to write home about and can be bested by ~$500 consumer SLA printers. It is very fast, though, and the technique is just getting started.

Today, the most common form of photosensitive resin printers use stereolithography (SLA). These printers have a vat of resin with a window at the bottom, and on the other side of the window is a DLP projector. SLA printers still print one layer at a time: a build platform lowers into the resin from above and nearly touches the window, leaving just enough room for a single layer of resin between the window and the build plate. The DLP blasts the single layer of resin with the specific light pattern for that first layer, then the build platform moves up one layer, more resin pours in, and another layer is projected by the DLP. So a stereolithography printer hardens resin one layer at a time with a 2D display, while this rotational 3D printing method hardens resin all at once with something more akin a 3D laser hologram.

Another benefit to this printing technique is that by printing an object suspended in the print solution, there is no need for additional support structures. The EPFL says this makes the technique a good idea for printing delicate or soft objects, including 3D bioprinting.

The researchers have set up a spin-off company called “Readily 3D” to develop and market the technology.