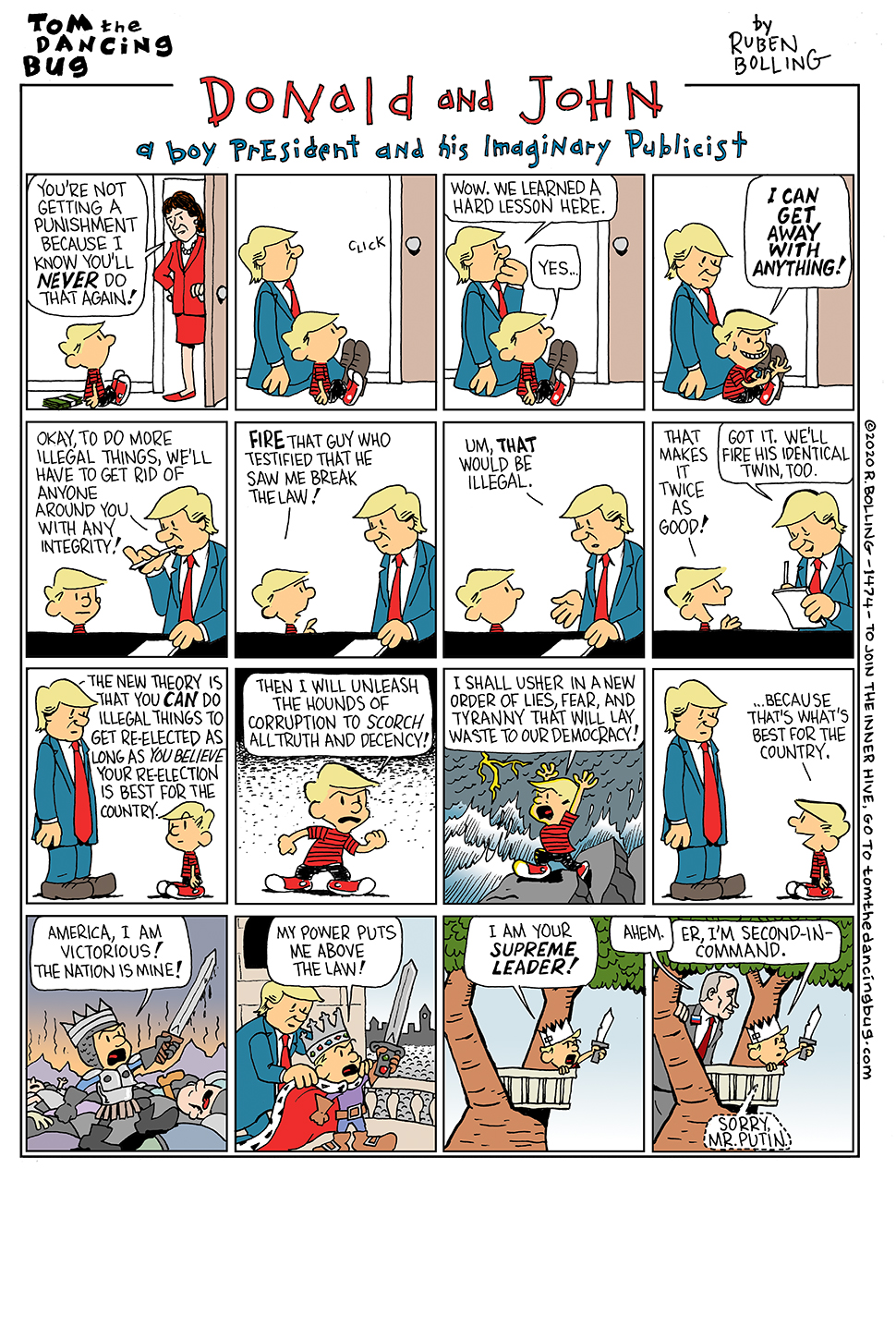 Tom the Dancing Bug, IN WHICH the spunky little boy president Donald gets away with being a very bad boy, and his imaginary publicist John helps him plot revenge and much more authoritarian naughtiness.

PLEASE DO join Tom the Dancing Bug’s INNER HIVE! Be the first kid on your block to see each week’s comic, get extra comics, sneak peeks, insider scoops, and lots of other stuff! JOIN TODAY!

FOLLOW @RubenBolling on the Twitters and a Face Book perhaps some Insta-grams, and even my/our MeWe

Tom the Dancing Bug, IN WHICH President Trump shoots a man on Fifth Ave. and the media urgently reports both the Democratic and Republican perspectives

Super-Fun-Pak Comix, feat. The Floating Head of Irrelevant and Wrong Predictions, and MORE!

Tom the Dancing Bug, IN WHICH Super-Fun-Pak Comix features Footprints in the Sand, Dinkle the Unlovable Loser, Celebvolution, and MORE!

Tom the Dancing Bug, IN WHICH the Impeachment Trial’s Republican Jury Room explodes with 53 Angry Men

While we all love our iPhones and iPads, celebrating the releases of their latest and greatest versions, it’s amusing to consider how much we at the same time HATE the main item that keeps these little tech marvels powered up and working. No, Lightning cables don’t exactly inspire feelings of awe and wonder. It’s more […]

Every family is chock full of stories. Stories of history, stories of memory, stories of accomplishment and stories of love. From a grandparent’s tales of life decades ago to a couple’s first meeting to amazing life experiences and moments that you wish could be preserved for future generations. Unfortunately, we all don’t have the literary […]

Minimalism isn’t just trendy, it’s also wise. Clearing clutter and keeping things simple in your home is great for both your mind and for the earth. Bring that movement to your bedside when you replace just about everything on and around your nightstand with the Tree of Light: Wireless Charger + Bluetooth Speaker + LED […]